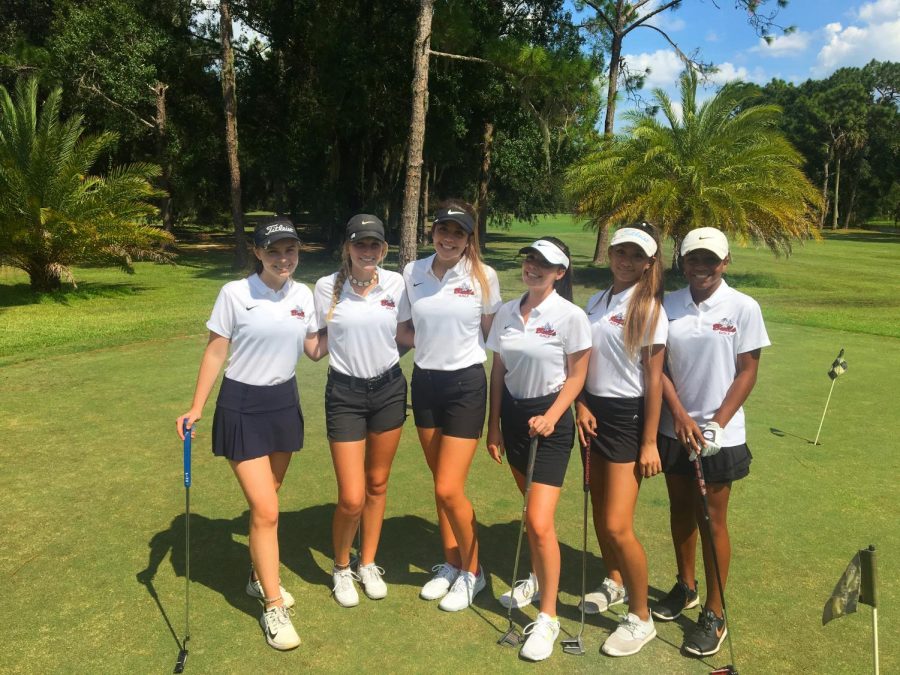 The top 6 players on the girls golf team pose for a photo before their match.

The girls golf team beat Fivay High School in their most recent match.

The Varsity Golf Team competed in a weekend tournament on Saturday, September 28th. The tournament took place in Sarasota and consisted of eight teams. The girls battled it out and ended up finishing second place.

Norah Catlin shot a 79, Tiffany Colins shot an 81, Loryn Finn shot a 84, and Carmen Phousirith shot an 86 for a grand total of 330 for the top four players. This group of girls set the new school record for the lowest score on 18 holes in Wiregrass Girls Golf history.

The girls also took an automatic win against Fivay High School on Thursday, September 26th, due to Fivay’s lack of players. To qualify for a fair scoring between two teams, both teams need a minimum of four players and Fivay only had one player, resulting in a forfeit and adding to the Bulls’ recent winning streak. The Bulls finished with a score of 149 for their top four players on nine holes.

“It was weird having six girls against one girl, but she seemed unfazed by it,” Senior Morgan Sustachek explained.

“It made the competition really easy and we all felt more relaxed knowing we already won the match before we even started,” Catlin said.

Coach Jeremy Calzone brought his top six players (Catlin, Finn, Colins, Phousirith, Sustachek, and West) to play at Meadow Oaks. Even though the opposing team only had one player, it was a good chance for the Bulls to get some practice on the course, since they have another match at the same course against Hudson on October 1st.

“If our starting six would each shave a couple points off their game, we’d be the best team in the county,” Calzone explained.

The team competes in one or two matches a week and when they don’t have a scheduled match, they’re out at Pebble Creek (their home course) practicing and working on every aspect of their game.

Their next match is the Conference tournament, another 18-hole tournament, and the team’s goal is to come in first place and move onto Districts as they have done for the past five years.