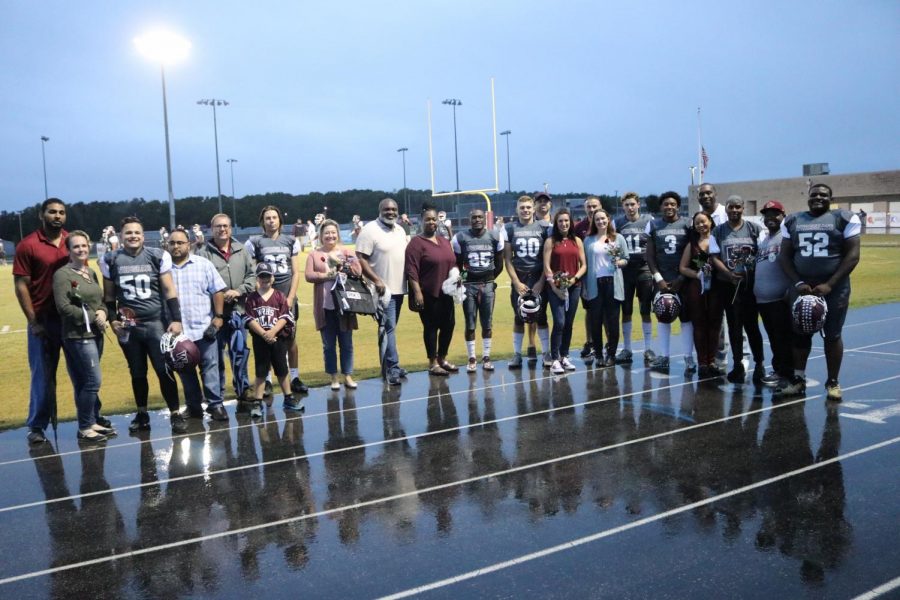 Before the game, the Bulls commemorated their senior football players.

Bulls’ “Senior Night” win against Auburndale sends them to playoffs

The Bulls defeated the Auburndale Bloodhounds Friday night 42-8. This win sets them up to enter the playoff setting.

Before the commencement of the football game, the senior athletes as well as the senior cheerleaders and marching band members were recognized on field for their last home game representing the Wiregrass Ranch Bulls. Representing the varsity Bulls football team Class of 2019, were Cameron Lee, Dorien Green, Grant Sessums, Hayden Wills, Javier Cabral, Kasean Ridgel, and Mason Buie.

The game served as a chance for the team to redeem themselves coming off a tough loss to the Plant High Panthers, losing 42-0. Head Coach Mark Kantor addressed what was wrong with the team’s play in the disappointing loss, and how it needed to be fixed before this make-or-break game.

“We got to block better, we got to tackle better, and we gotta execute better in all three phases of the game, so this past week that’s where our concentration was,” Kantor explained. “We gotta get better as a team.”

The first quarter began at a slow pace as neither team was able to make any impactful plays, but as the clock winded down to the final minute, Quarterback Grant Sessums threw a 40 yard pass to Wide Receiver Jonavon “J.T” Tillis, which set up a Bulls running touchdown by Running Back Nate Miller. The extra point kick by Kicker Hayden Wills was good, giving the Bulls the lead 7-0. When the football was kicked off to the Bloodhounds, Linebacker Mark Kieper tracked down the ball, forcing and recovering a fumble, giving the Bulls possession again right after the touchdown. The Bulls kept the possession going into the second quarter.

“I felt like we were strong on kickoff team,” Junior Mark Kieper explained. “The past couple of games our kickoff team hasn’t really been, but I feel like we got a lot faster, and stronger, and we’ve been able to get to the ball a lot quicker.”

Just thirteen seconds into the second quarter at the 11:47 mark, Sessums was freed up by great protection to make a crisp 30 yard touchdown pass to Wide Receiver Dorien Green, bringing the Bulls up 14-0.

The Bloodhounds only scored once in the entire forty-eight minute span. This touchdown occurred at the 7:47 mark in the second quarter, scoring off a pass. The Bloodhounds then completed a two-point conversion, making the score 14-8.

The third quarter of the game was quiet; no scoring was accomplished by either team.

The fourth quarter was a very productive quarter for the Bulls, scoring three touchdowns. Fullback Andrew Salum led the Bulls offense, with a 40 yard carry that set up the Bulls at the fifteen yard line. Salum rushed through the Bloodhounds’ defense again to score a running touchdown. The touchdown allowed the Bulls to boast a lead of 21-8 with just 7:54 left in the game. Salum later ran for a 20 yard carry to score another touchdown at the 3:49 mark to put the Bulls up 28-8.

“This was one of my biggest games of the season; it really put me out there in a sense because I just got off an injury, and now we got back in the playoffs,” Salum explained.

The Bulls’ defense remained strong, even with a commanding lead late in the fourth quarter. Keiper intercepted the ball to give the Bulls another chance for one more touchdown. The Bulls took swift action on the opportunity, with Sessums rushing for a five yard touchdown, raising the score to 42-8, ending the final game of the regular-season.

The Bulls will now advance to the playoffs where they will face off against the undefeated Lakeland High Dreadnaughts on Friday, November 9.