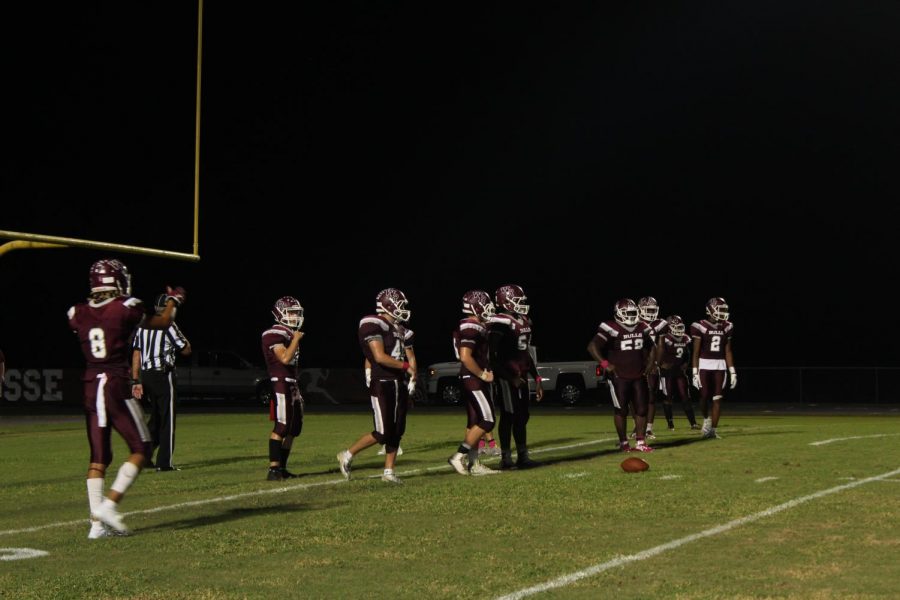 The Wiregrass Ranch Bulls gather at the line of scrimmage to make a play.

Bulls strong second half too much for Gaither Cowboys

The Bulls had a great Friday night performance to defeat the Gaither Cowboys 24-7.

The Wiregrass Ranch Varsity Bulls defeated the Gaither Cowboys 24-7 in a competitive conference game on Friday night. The game was physical and slow-paced, but the Bulls excelled taking down the Cowboys.

The Bulls were coming off a blowout win against Wharton, winning 42-6, and hoped to take this confidence into the Gaither matchup.

Both teams started off slow, as neither was able to score a touchdown in the first half. The Cowboys did come very close (within a yard) of scoring a touchdown during the first half, but the Bulls defense held strong.

Coming into the game, Head Coach Mark Kantor knew the Bulls defense had to be tight, the Bulls could not let the Cowboys’ offense heat up.

“Our defensive plan is solid, we had a bye-week last week so we had an opportunity to prepare a little bit longer for Gaither,” Kantor said.

Great defense kept both teams scoreless in the the first half, but the Bulls had a superb start to the second half as Quarterback Grant Sessums threw a 40+ yard touchdown pass to Wide Receiver Keith Walker for a quick score in the third quarter.

“It was like business and move on,” Walker stated.

The touchdown was the start of a hot third quarter as the Bulls offense and defense caught flame and dominated Gaither. Shortly after the opening touchdown, the Bulls defense shut down the Cowboys offense forcing a fumble, which was then recovered by Defensive End Cameron Lee. The fumble along with an an 18 yard pass would end up setting up a three yard rushing touchdown by Running Back Mason Buie to bring the Bulls up 14-0.

The Cowboys attempted to close the wide gap in score with their next possession, but their hopes quickly faded away as the Bulls forced a fumble. The fumble recovery led to a touchdown pass from Sessums to Walker to seal the game 24-7.

The Wiregrass Bulls now boast a 4-2 record and will formulate a game plan for their Homecoming game, Friday, October 12 at 7:30 p.m. against the Freedom High Patriots (3-4). The Bulls had an impressive 38-9 victory against the Patriots last year and hope to have a similar outcome this year.