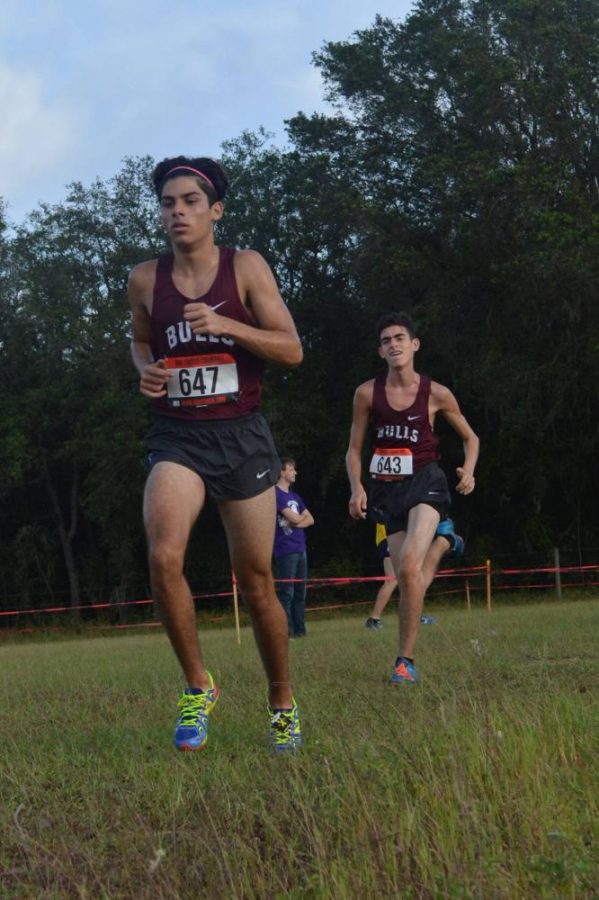 (Alex Medina and Sebastian Hernandez) moments before they made their decisive move that clinched victory for us. (passing Land O’ Lakes’ number five runner).

The boys Cross Country team came out with a big win this weekend at their conference meet. Both boys and girls raced in this conference meet, but only the boys competed the race. The girls race was rescheduled for October 25th due to confusion on the course.

Boys head coach, Chris Loth, is excited about this win for the team.

“The program has won six conference championships; outside of the first one, this is the most satisfying. We lost by a point several years ago to Land O’ Lakes at this exact course, so being able to turn the tables on them and win by a point really made it one of the more memorable wins we have ever had,” explains Loth.

Coach Loth explains that this season was very different from previous years.

“This season has been a unique one, trying to maneuver our way through multiple starts and stops due to the hurricane season and having several meets cancelled and not rescheduled.”

The Wiregrass Ranch High School (WRHS) girls Cross Country team has won 8 out of the 11 conference meets they have attended. Due to confusion on the course, many girls got lost during the race and the meet had to be scratched.

“The course was poorly marked with no one assigned to direct runners. Therefore, quite a few girls from multiple teams went the wrong way,” Girls head coach, Don Howard, explains.

Senior, Reis Ehman is a key runner on the team. She has a personal record of 20:14 in the 5K. Ehman has been running since the 6th grade and hopes that this year will close out her high school cross country career on a positive note.

“My goal for myself personally and the team is to advance to regionals. I’d also love to PR,” explains Ehman.

Update on the article 10/18- The Athletic Director of Pasco County decided the girls’ race would not be re-run. The winner of the race has yet to be determined.