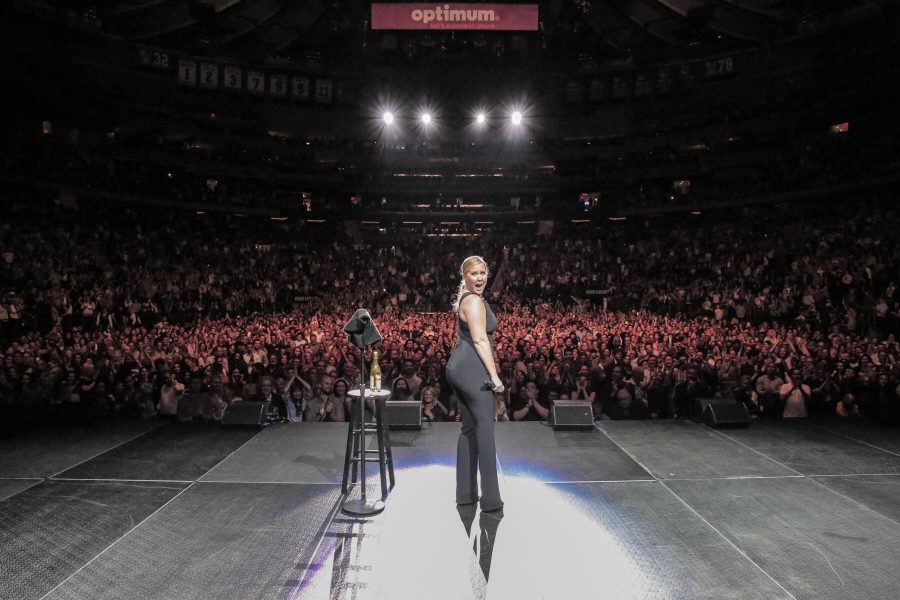 About 200 audience members left Amy Schumer’s comedy show, at Amalie Arena, after Schumer verbally assaulted presidential candidate Donald Trump. The Amalie Arena has a capacity of 10,000-15,000 for concerts, according to their website.

She relates her personal assault experiences with the recent allegations against Trump.

Immediately after fans began to boo Schumer, she demanded that security kick them out of the arena.

Her show went from a humorous comedy show to a rant about politics.

At one point in her performance, Schumer invited a Trump supporter on stage, asking him, “Do you get worried at all with how impulsive he is? That he gets so fired up from Saturday Night Live doing a skit on him… Do you worry that he’ll be impulsive and get us into a lot of trouble we can’t get out of?”

Different attendees spoke out about their opinions on the show, through twitter.

On the other hand, @jeffreydsomers, thinks that what Schumer said during her show was wrong.

“It is a shame Amy Schumer hijacks a comedy routine in Tampa to blast a political candidate.”

Although Schumer offended many of her fans, anybody who paid to see the show should have been aware that she is not a Trump supporter. She has publicly made statements regarding her political views in the past.

Many comedians tend to make political jokes, so it should have been expected by the audience, especially with the upcoming election.

In addition to her statements about Trump, Schumer also made negative comments towards Tampa. She stated in her book, “I was on the road doing a tour and traveling between two horrendous cities: Fayetteville, North Carolina, and Tampa, Florida. I’m not scared about writing that and making those people mad, because I know for a fact that no one who lives there has ever read a book.”

The comedian also made a comment about Floridians when the audience began to boo her after her negative remarks about Trump.