Elijah Howell has historic night in victory over Gaither

Elijah Howell hits 1,000 points in his career for the boys varsity basketball team at the Ranch. 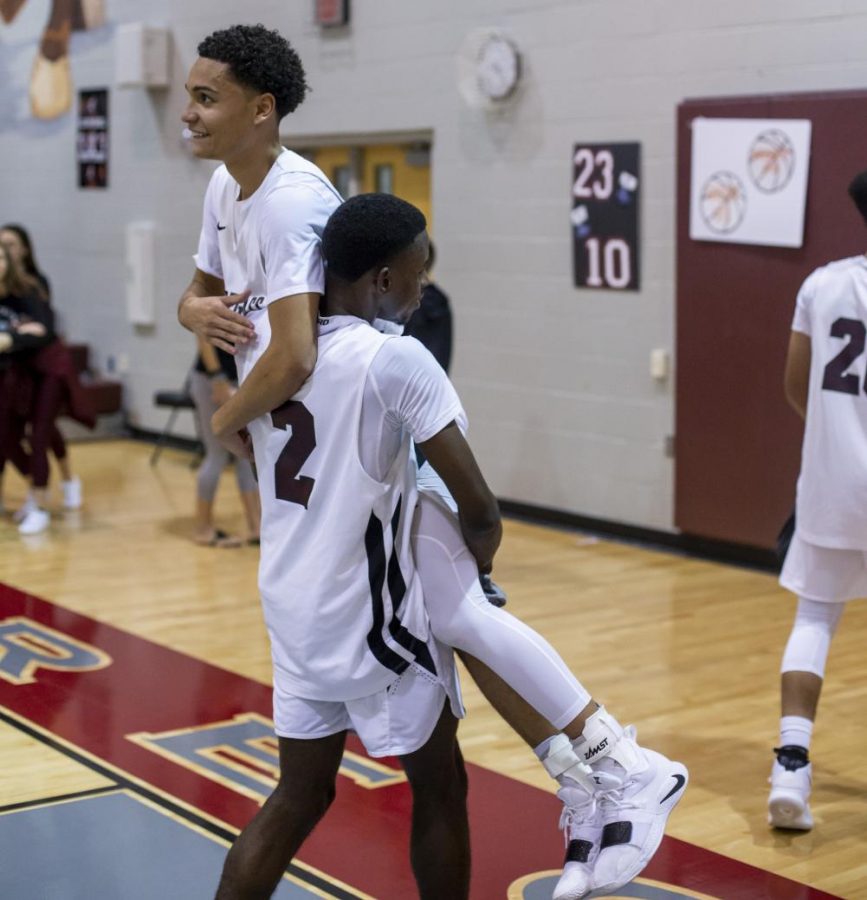 Elijah Howell celebrating his 1,000 point after the game with teammate Brian Parker.

Elijah Howell, point guard for the Wiregrass Ranch boys basketball team, hit the 1,000th point mark in his high school career last Friday vs Gaither. Howell also holds the school record for most 3-point shots made with over 200 in his four years.

“It means a lot to score 1,000 points here; it’s something I’ve always wanted to do since middle school,” Howell explained.

Howell’s beginnings can be traced to the first time he found a love for basketball when his mother signed him up for kids basketball at the local recreational center. Howell played for multiple youth teams but found his rhythm with the John Long Middle School team where he was the starting point guard in 7th and 8th grade. Howell quickly gained the identity of a proficient scorer who could run the court and command the offense.

Howell continued his basketball career in high school, making the varsity team as a Freshmen. Howell began playing in a sixth-man position as he put in valuable minutes, averaging six points a game in the 26 games that he appeared in. Howell continued to improve his scoring average each season, as he gained the starting point guard role, from 10 points in his sophomore year, 12 in his junior year and 16 in his senior year.

Howell exemplified leadership and ability many times this year as team captain. He had seven games this year where he scored 20 or more points, but also was able to distribute the ball at the right time for assists. Looks of calmness and awareness were evident as Howell was always zoned into the game, his team, and opponents.

“He is a great leader and puts the team above himself, but when needed can takeover a game through scoring, rebounding, and steals,” Senior teammate Logan Ghoumari commented.

Jeremy Calzone, coach of the varsity boys basketball team at the Ranch since its start in 2006, has praised Howell on being a model student, player, and person.

“Elijah has meant a lot to me personally,” Calzone explained. ” He has been steady, calm, and made me a better coach for sure. My kids often imitate him at our house. I couldn’t ask for a better role model for my kids.”